Since 1911 International Women’s Day has celebrated women’s achievements and campaigned for women’s equality. Although we have seen lots of positive change since then, there is still a need to continue to promote and campaign for gender equality.

International Women’s Day is also specifically relevant to the games industry. In the UK women make up only 28% of the industry (Ukie Census, 2020), despite the fact that various studies suggest at least 45% of video games players are female (and in some age groups there are more female players than any other demographic).

Here at Payload we don’t have as many women in the team as we would like, but we are working to change this and to ensure our workplace is truly inclusive to everyone! To celebrate International Women’s Day we asked some of the women working at Payload to tell us about their favourite female video game characters and how they ended up working in video games.

Sammi and Cheryl from the QA (quality assurance/testing) team joined Khally (Human Resources/Operations) to chat about games and their experience in the industry. 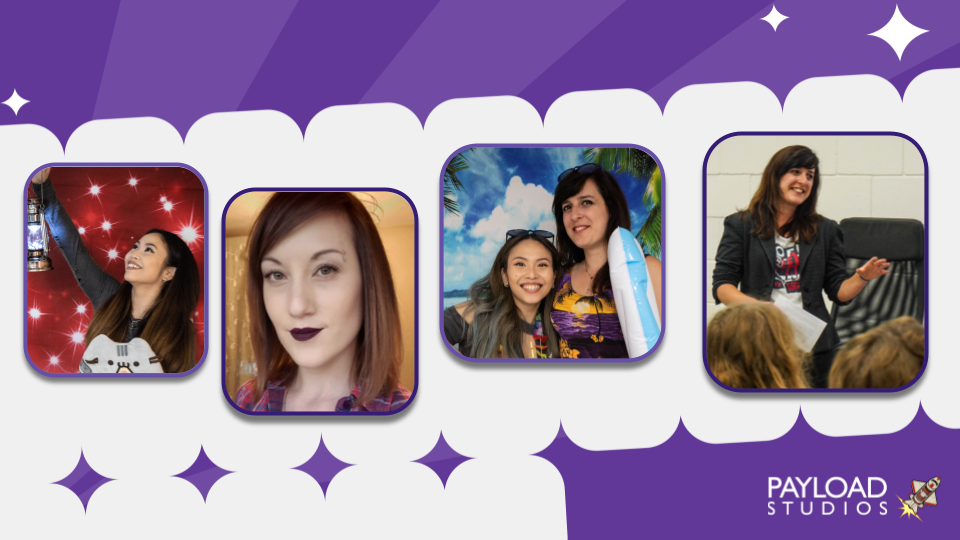 Who are your favourite female video game characters?

Khally: That’s a tricky choice. Yuna and Lulu from Final Fantasy X have to be up there. It’s partly because I love the game, but also because the characters are a lot of fun to play, have some of the coolest Limit Break moves and an interesting backstory. Although I’m not convinced how practical Lulu’s outfit is… I also have to mention Animal Crossing, partly because I have played it a lot in the last year, but also because the customisable options for the playable characters are a lot more inclusive than most games I’ve played.

Cheryl: I absolutely love Tiffa from Final Fantasy VII. She was one of the first female characters that really stood out to me. She had immense fighting skills, was like a tough and grounded version of the ‘girl next door’ and I really like characters like that.

Ivy from Soulcalibur is another favourite. She does all this mad crazy stuff, has an interesting storyline and some amazing moves, but is so hyper-sexualised that I feel a bit conflicted about mentioning her…

Sammi: But if you think about it, in some ways we have to take what we’re given and we can take that and own it. People might just look at characters and say ‘she’s just something to look at’, but we know that she’s more than that.

Khally: I think that touches on such a great point. There are so many characters which have a lot of great elements, but then they end up being unnecessarily sexualised which can be quite uncomfortable. However that doesn’t mean they are dislikeable characters – we can be fans even if we recognise the issues with their representation. Hopefully in the future we’ll see improvements in the diversity of characters in general and how they are represented, in terms of underrepresented genders as well as other underrepresented groups.

Sammi: My favourite will always be Jade from Beyond Good and Evil because she’s a badass! I feel she, and the game in general, are pretty underrated. I really like her story and the fact that she’s a multifaceted character – she’ll fight when she has to, but there’s more than that to her character.

You’re all part of the Payload Studios team, but how did you end up working in games? Was this something you always wanted to do?

Sammi: I think like a lot of us I loved playing video games. I thought I’d do something art related, but then ended up studying video games and was looking at how to get my entry into the industry. I started with testing and after a few opportunities I realised that I didn’t really care for some areas of art, so decided to stay in QA which I enjoy. It’s shown me things about myself and helped me achieve things I didn’t even know I could achieve. I’m on a different path to the one I expected, but it’s one I didn’t even know I needed.

Cheryl: I started in a little village and experienced a lot of the stereotypes that girls aren’t supposed to play games. As a kid I used to play video games in the garage when I needed a break and it was always something I could shelter in. I ended up with a job in a game store and that was the start of a connection to the industry. It was a discovery of a world I felt I fitted into. I find the industry full of priceless, incredible people and I gravitate towards that.

You’re also all part of Payload’s internal Inclusion Working Group (part of the studio’s wider diversity and inclusion initiative). What has this been like for you?

Sammi: It’s good that internally we have a voice to be part of what’s happening in society like feminism, the Black Lives Matter movement, or more recently the fight against anti-Asian hate crimes. We can do our own bit to do something about it. I really like that and at Payload, from the beginning, I’ve felt like I have a voice which is heard. It’s nice to see it all happen.

Cheryl: It’s so inspiring to help create real futures for people [in the games industry], helping people to come into this world and stay in this world. I feel very proud and privileged to be part of this future-building and people-building. I feel more confident about my future.

Khally: For me one of the most valuable things about being at Payload has been being empowered to learn about how the industry can be more inclusive and to actually be able to take action to promote that. When I was younger I felt like the problems in the industry, and wider society, were so profound that there was nothing I could to bring about change. It’s amazing not to feel that way anymore. For example, when Sammi and I first talked about running the Game On events we were given the support to make that happen.

I think we’re doing some super cool stuff, like the Tentacle Zone Incubator, and I also hope that through the Inclusion Working Group we can get more of the studio involved and continue to look at how we can be better, as well as continue to use our platform to help other studios to do the same thing. As part of this I’m hopeful that we’ll have more women working in the studio soon!

To find out more about International Women’s Day, visit their website. For more details on how Payload is working towards a more inclusive and diverse studio check out our diversity page.